Background: While patients with functionally disabling Kaposi’s sarcoma (KS) require chemotherapy for rapid reduction in tumor burden, the management of KS which lacks functionally disabling complications is less certain. This is particularly true in sub-Saharan Africa, where the relative high cost of chemotherapy makes decisions about its use difficult and the use of antiretroviral therapy (ART) alone common as initial KS treatment. However, because a substantial fraction of patients with KS in Africa who are treated with ART alone fare poorly, it would be useful to be able to predict which patients with KS will do well on ART alone versus those who might benefit from additional interventions.

Methods: We studied HIV-infected adults in Uganda with KS with no functionally disabling complications who were initially treated with ART alone as part of the AntiRetrovirals for KS (ARKS) trial. We evaluated the predictive value of 57 variables regarding clinical history, physical exam, laboratory characterization, and radiographic findings, each measured prior to ART. The outcome was death or KS progression necessitating chemotherapy. The Least Absolute Shrinkage and Selection Operator (LASSO) was used to identify variables with the highest predictive accuracy upon cross-validation.

Results: Among 224 subjects, 44% were women, and median values prior to ART initiation were: 34 years old, 119 CD4+ T cells/mm3, and 5.3 log10 copies/ml of plasma HIV RNA. The final prediction model had 3 variables: number of anatomic sites with KS, hemoglobin, and Karnofsky performance score. The model showed adequate discrimination: area under the ROC curve = 0.84 (95% CI: 0.78-0.90), and at an optimal cutpoint, the sensitivity for predicting poor outcome was 88% and specificity 74%. Calibration was also good (Figure). At lower probabilities of observed outcome, the model tended to overestimate the probability of poor outcome, while at higher ranges of observed outcome, it slightly underestimated outcomes.

Conclusions: A prognostic model, consisting of inexpensive measurements, can help to predict which patients in Africa with KS — who present with no functionally disabling complications — will fare poorly when treated with ART alone. The presence of number of KS-containing anatomic sites and hemoglobin in the model suggests the importance of quantitative KS burden in prognosis. The model may help clinicians better advise patients about prognosis and, importantly, inform chemotherapy decisions. 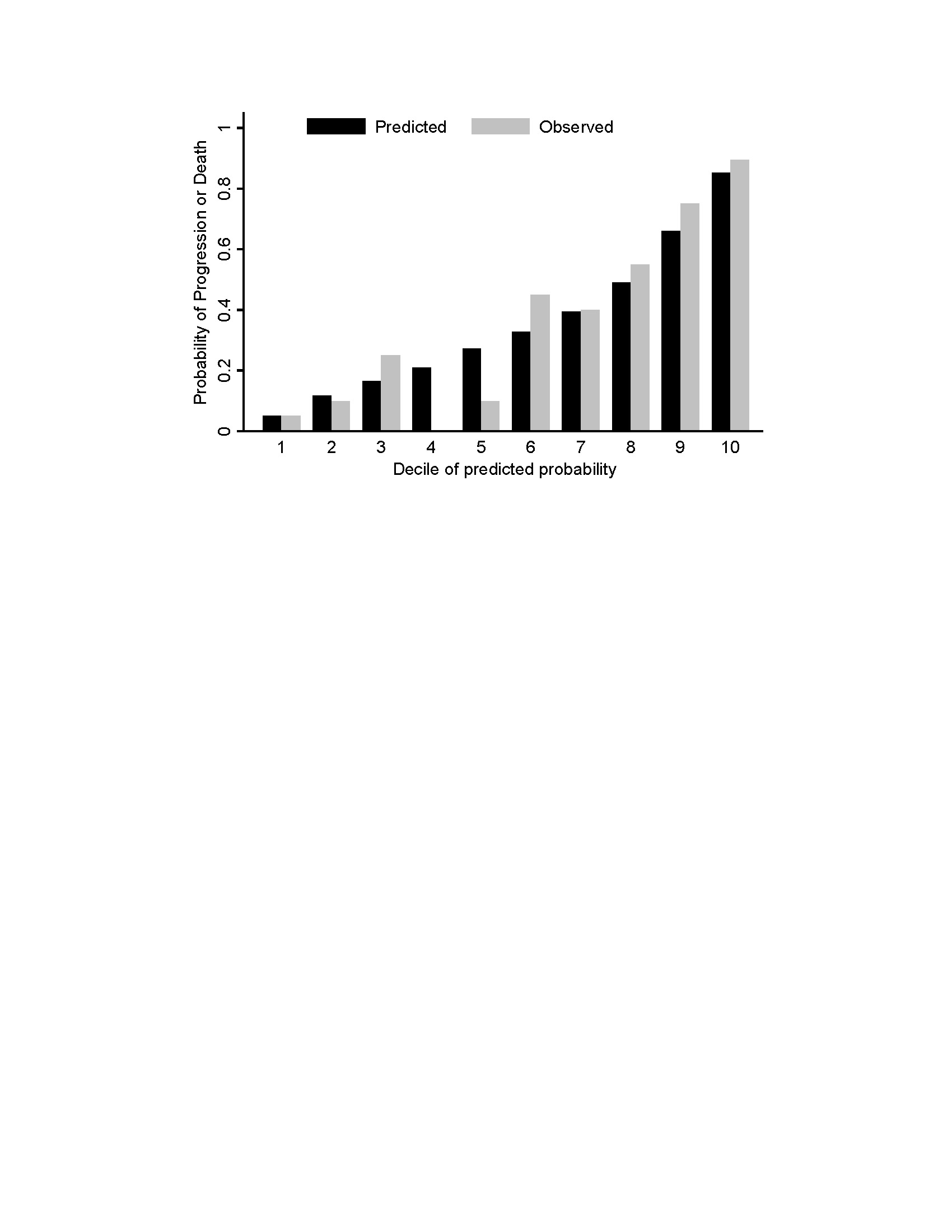 Figure. Â Calibration of risk prediction model.  For each successive decile of predicted probability of progression/death, the mean predicted and observed probabilities for the patients in the decile group are shown.

KS and Cervical/Anal Dysplasia: Tale of 2 Tumors and TB and Other OIs