Background: The subdermal levonorgestrel (LNG) implant is recommended for long-acting, reversible contraception with high efficacy (expected failure rate <1%). Efavirenz (EFV)-based antiretroviral therapy (ART) may decrease LNG pharmacokinetic (PK) exposure via cytochrome P450 mediated drug-interactions. A priori, we hypothesized that over 1 year of combined use, EFV would reduce LNG exposure, but not below the proposed threshold for contraceptive efficacy (180 pg/mL).

Methods: We present the final, 48-week results of a longitudinal, parallel group, PK evaluation of HIV-infected, Ugandan women desiring an implant for contraception. A standard dose LNG implant was inserted at entry in two groups: (1) subjects not yet eligible for ART (control group; n=17); (2) subjects with undetectable HIV-RNA on tenofovir/emtricitabine/efavirenz (EFV group; n=20). At each visit, subjects were counseled on condom use and a pregnancy test was performed. Blood was collected at 1, 4, 12, 24, 36, and 48 weeks after entry and plasma LNG concentrations were analyzed by a validated LC-MS/MS method, with an assay calibration range of 50-1500 pg/mL. Demographic data were analyzed with a T-test or chi-square, as appropriate. PK data were reported as geometric means (GM) and GM ratio.

Results: All women were Black African with a mean age of 31 years. Subjects in the EFV group were on EFV for a median of 10 (range 5-66) months prior to entry. PK data are presented in the Table and reveal a 45-57% reduction in LNG concentrations beginning at week 1 and persisting through week 48. Unexpectedly, 3 women in the EFV group became pregnant between weeks 36 and 48. No pregnancy occurred in the control group. The LNG concentration prior to pregnancy in each subject was 122, 297, and 303 pg/mL, measured 2, 8, and 2 weeks, respectively, prior to conception. For subject safety, the EFV study arm was halted. At the last study visit, 15 subjects (75%) in the EFV group, but no subjects in the control group, had LNG concentrations below 303 pg/mL (the highest concentration at which a pregnancy was observed; p<0.001).

Conclusions: Contraceptive failures (15%) were seen among HIV-infected women on EFV-based ART within a year of receiving an LNG implant, and LNG exposure was markedly reduced. In addition, the proposed threshold for LNG efficacy (180 pg/mL) was inadequate in our study population. Alternative contraception should be offered to women on EFV-based ART plus LNG implant, but studies of novel implant dosing strategies should be pursued. 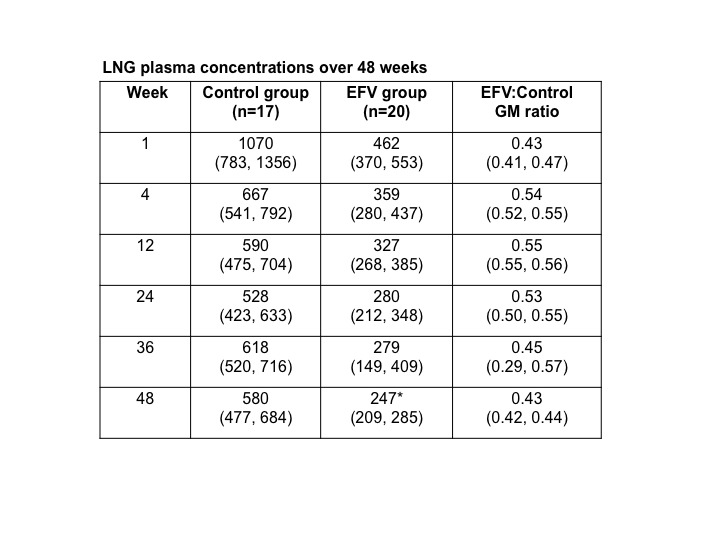 Data presented as pg/mL and geometric mean (GM) with 90% confidence intervals, unless indicated.
* n=11; excludes 3 pregnant patients and 6 subjects who did not reach the week 48 endpoint due to study arm closure.