Background: The SYNERGY trial demonstrated that high cure rates for HCV infection could be achieved after 12 week treatment with sofosbuvir (SOF) and ledipasvir (LDV), and after only 6 weeks if GS-9669 (a non-nucleoside polymerase inhibitor) or GS-9451 (a protease inhibitor) was added (Kohli et al., The Lancet 2014). Here we employed viral kinetic modeling to better understand the effect of each of these drugs in this very rapid and effective cure of HCV.

Methods: In order to evaluate the effect of each agent, we conducted a pooled analysis of the early viral kinetics in patients treated with SOF + ribavirin (RBV) (Osinusi et al., JAMA 2013), SOF + LDV and SOF+LDV+GS9669/GS9451. Viral kinetics were fitted using a multiscale model that allows one to distinguish the effect of each agent in blocking vRNA replication, εα, from blocking viral assembly/secretion, εs(Guedj et al., PNAS 2013).

Results: The viral load decline was initially much more rapid in all arms of Synergy than in patients treated with SOF + RBV. This was attributed in our model to a high effectiveness of LDV in blocking viral assembly/secretion (εs=99.7%). In contrast, the delayed response in patients treated with SOF + RBV suggests that SOF has only a minimal effect in blocking assembly/secretion. However by day 3, patients treated with SOF + RBV achieved largely comparable levels of virus as the patients in all arms of Synergy (Fig 1), demonstrating a high effectiveness of SOF in blocking vRNA production (εα=99.96%). Surprisingly, the total effectiveness in blocking vRNA production was significantly lower in patients receiving SOF+LDV±GS-9669 (εα=96.5%, P<10-10) and, to a lesser extent, SOF+RBV±GS-9451 (εα=98.5%, P<10-10). Eventually, the final phase of viral decline was largely similar in all groups, and similar to that observed with IFN-based therapies.
Consistent with this slow final phase, the model predicted SVR rate of 85.2% after 24 weeks of SOF+RBV, but only 43% and 10% after 12 and 6 weeks of SOF+LDV and SOF+LDV+GS9669/GS9451, respectively, i.e., much lower than what was observed in the Synergy trial.

Conclusions: The kinetics of viral decline in patients of the Synergy trial was remarkably slow in regard of the very rapid cure of HCV. This suggests that HCV RNA is not a reliable marker for predicting outcome of treatment containing SOF+LDV. Additional mechanisms of action that are not reflected in the observed viral load, such as production of non-infectious virus, may explain the high cure rates. 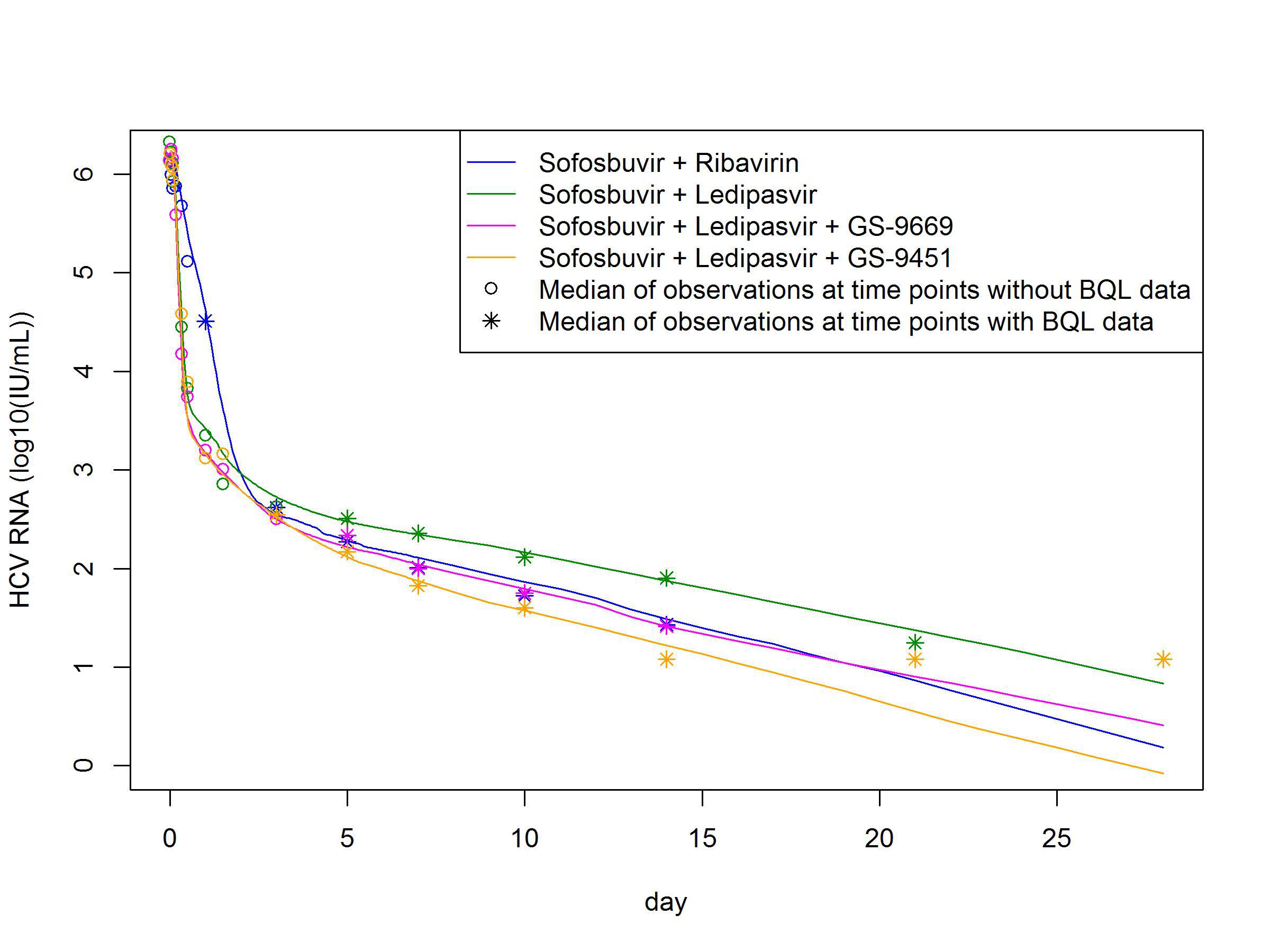