Background: HIV pre-exposure chemoprophylaxis (PrEP) is becoming a standard of prevention care in many countries; however concerns about costs and side effects can limit uptake. The HPTN 067 ADAPT trial, a Phase II, randomized, open-label clinical trial of oral emtricitabine/tenofovir disoproxil fumarate (FTC/TDF) PrEP, included a cohort of South African women in Cape Town. The study investigated whether a nondaily versus daily regimen of FTC/TDF, resulted in equivalent prophylactic coverage of sex events, less tablets required and fewer side effects.

Methods: After 6 weeks of directly observed dosing (DOT), participants were randomly assigned to one of three unblinded PrEP dosing regimens for 24 weeks of self-administered dosing: daily (D), twice weekly with a post-intercourse boost (T), or before and after intercourse (E). Pills were dispensed from a Wisepill device that recorded each opening. Participants were contacted weekly to review Wisepill data and sex events. Plasma and PBMC were collected and analyzed for tenofovir (TFV) and FTC and their active metabolites at 10 and 30 weeks. Coverage was defined as >1 pill taken in the 4 days before and >1 pill taken in the 24 hours after sexual intercourse. Adherence was defined as the percentage of recommended pills taken for each regimen.

Results: Of 191 women enrolled in the DOT phase, 179 were randomized to the self-administered phase. Median age was 26 years (range 18-52), 80% were unmarried and 83% unemployed. PrEP coverage differed by arm as shown in the table (P<0.001). Fewer pills were required in T and E compared with D (p < 0.001). Side effects were uncommon in D, and less frequent in T and E. Adherence to the assigned regimen was greater in D compared with T and E (P<0.001); adherence to post-intercourse dosing in the nondaily arms was low. When sex was reported in the prior week, both plasma TFV (consistent with >1 pill in prior week) and PBMC TFV diphosphate (consistent with >2 pills in prior week) were detected in more women in D at weeks 10 and 30, compared with T and E (p < 0.05). HIV seroconversions were not significantly different by arm.

Conclusions: The majority of women took oral PrEP when made available in an open label study. Daily dosing resulted in better coverage of sex acts and adherence, and higher drug levels. Daily dosing may foster better habit formation and provide the most forgiveness for missed doses at observed adherence levels. These findings support current recommendations for daily use of oral FTC/TDF PrEP in women. 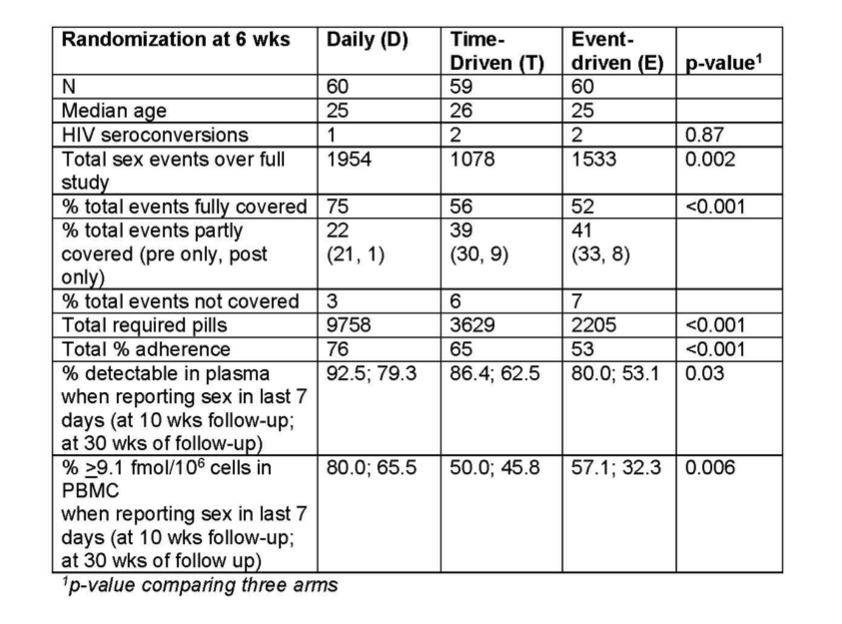 PrEP: Measures and Correlates of Adherence

Bekker, Linda-Gail
Dept of Medicine and Institute of Infectious Disease and Molecular Medicine