Background: Previous studies in persons with an initially normal eGFR have been underpowered to assess whether the incidence of CKD increases immediately after starting potentially nephrotoxic ARVs and then remains stable or continues to increase with duration of exposure.

Methods: D:A:D study participants were followed from baseline until earliest of CKD, last eGFR, 1/1/2013 or last visit plus 6 months. Baseline was defined as the first eGFR after 1/1/2004; persons with <2 eGFRs after baseline or where baseline eGFR <90 ml/min/1.73m2 were excluded. CKD was defined as confirmed (>3 months apart) eGFR <60 ml/min/1.73m2 and chronic renal impairment (CRI) as confirmed (>3 months apart) eGFR <70 ml/min/1.73m2. Poisson regression was used to estimate the incidence of CKD associated with cumulative exposure to or time since stopping tenofovir (TDF),ritonavir-boosted atazanavir (ATV/r), lopinavir (LPV/r), other ritonavir-boosted protease inhibitors (BPI) or abacavir (ABC).

Conclusions: The association between TDF, ATV/r, LPV/r and CKD in persons with an initially normal eGFR was not limited to an increased incidence immediately after starting the ARV, but clearly persisted with increasing exposure to TDF, LPV/r and ATV/r. After 6 years exposure, the relative risk of CKD was increased by 97%, 320% and 140% for TDF, ATV/r and LPV/r respectively. A clear decrease in the incidence of CKD after stopping ARVs was only observed for TDF; but the incidence remained significantly higher 2 years after stopping compared to those who had never started TDF. 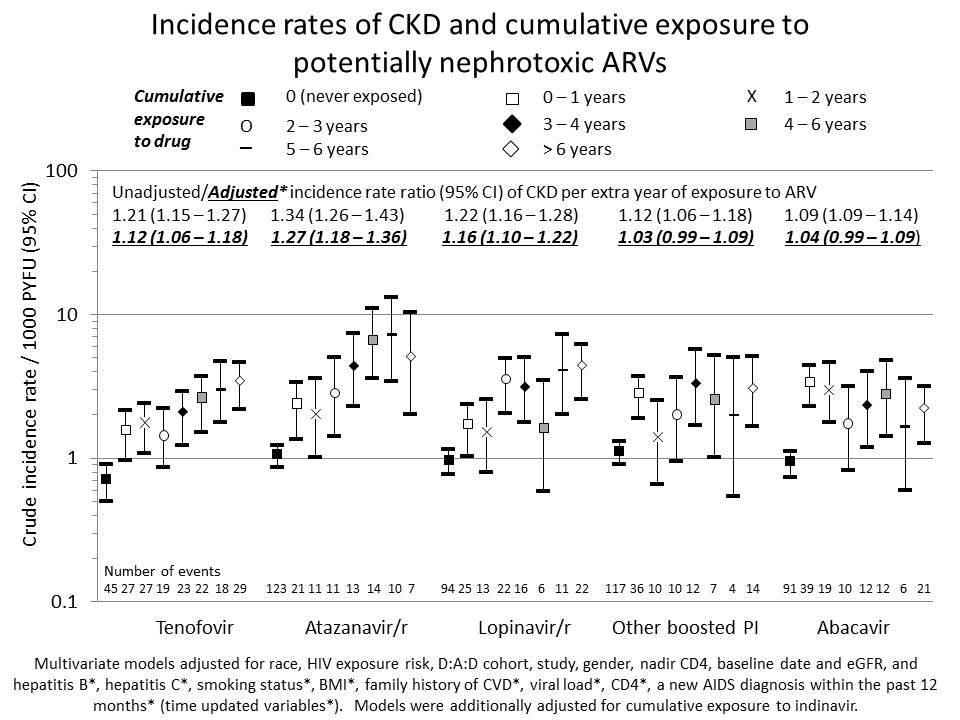