Background: Early ART initiation has been shown recently to delay the time to AIDS, strengthening the case for early intervention. It is unclear whether immune reconstitution in particular, CD4/CD8 ratio, is enhanced with intervention at Primary HIV Infection (PHI).

Methods: We undertook a retrospective study of a PHI cohort (ART initiation <3 months from PHI) from a single center (Royal Free Hospital, London, UK) who had received >5 years of continuous ART. The group were compared to a cohort of individuals who started ART at the same center during chronic infection (CI; ≥1 year after diagnosis) with a pre-ART CD4 count>350 cells/mm3 and who also received >5 years(y) of continuous ART. Median CD4 count, CD4%, CD4/CD8 ratio and presence of optimal immune reconstitution (OIR) (CD4≥800 cells/mm3 or CD4%≥40% or CD4/CD8 ratio≥1) were assessed and compared in the 2 cohorts at 1, 5 and 10y post-ART initiation by considering the measure that occurred closest to the time-point, provided it was <6 months. Time to normalization of CD4/CD8 ratio to ≥1 was also assessed using Kaplan-Meier methods.

Conclusions: Immunological response to ART in this cohort was excellent, with high median CD4 counts after 10 y of ART. Despite this, ART initiation within 3 months of PHI shows improved immune reconstitution in terms of CD4 T cell count and CD4/CD8 ratio, when compared to a CI cohort initiating ART without severe immunosuppression,. These differences persisted even after 10 years of ART, suggesting damage to the immune system during the early stages of HIV infection can have long-term consequences. 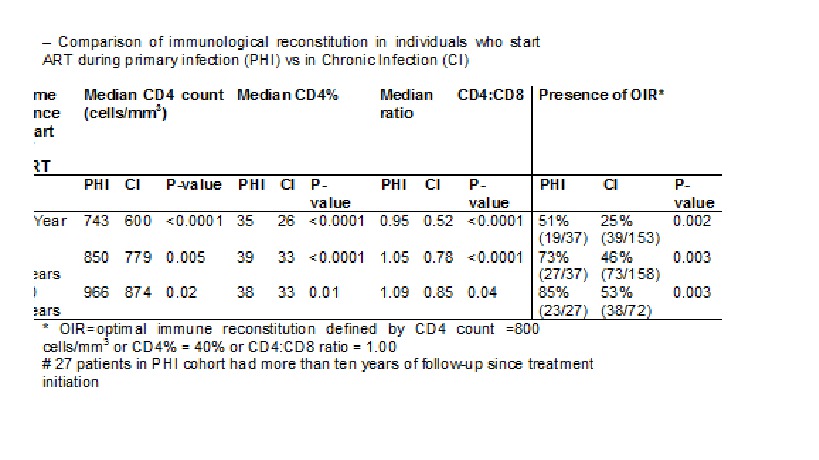 Dissecting Pathogenesis Through In Vivo Studies